This conference (17 -18 May 2018) was organised by the Asia Research Institute (ARI), National University of Singapore (NUS); with support from International Commission on the History of Meteorology (ICHM), and the Japan Society for the Promotion of Science (JSPS).

The overarching aim of this conference was to explore the weather in the history of anthropogenic Asia. Asia was critical to the development of global meteorological science: understanding extremes such as typhoons were essential to trade, economy and society. Despite the centrality of extreme weather to urban Asia historically (and in the present day) however, this subject has remained relatively under researched. Climate and weather history are established, yet developing fields, although arguably, studies in this field have disproportionately favoured Northern Europe and the US, in large part because of the greater availability and accessibility of records. There are still many knowledge gaps for Asia, partly because of the paucity of records in comparison to Europe or because many archives have either been restricted or have only relatively recently been opened. This conference therefore aimed to fill a knowledge gap; connect with historiographical trends that view scientific history as a globally linked enterprise and, bring scholars working in the field together in discussion. It also explored interdisciplinary work on the subject, with papers from historians, anthropologists and scientists. 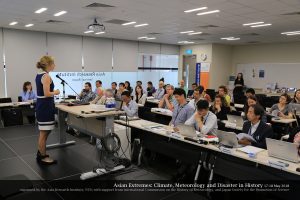 Taking a cultural approach, Chi Chi Huang (University of Hong Kong) used visual and written representations of typhoons in Hong Kong to explore the understanding of typhoons in the British media, connecting back to the literature of ‘tropicality’ and ideas of nature common to British colonial culture. Similarly, Clark L. Alejandrino (Georgetown University) explored cultural adaption and elite and popular ideas of typhoons held in the coastal communities of mainland China, through different forms of written narrative, including poetry and official reports. Jesse D. Sloane (Yonsei University) considered the popular reception and cultural importance of religious weather control measures. Focusing on the Shanxi and Shaanxi provinces of China, he explored the language used by local residents and government officials to conceptualize meteorological events and measure the effectiveness of their own attempts at intervention. Also considering religious methods of control the weather in China, in particular prayers for rain, Xia Shi (New College of Florida) saw official praying for rain in public ceremonies as a complex issue with no single explanation. Prayer’s by local warlords were performances of local authority and claims to political legitimacy but were also connected to popular and ‘scientific’ ideas about the weather and, in her words, the ebb and flow of popular religion and secularization. Mark Frank (University of Illinois at Urbana–Champaign)revealed the story of meteorological staff working in the extreme conditions of the Sino-Tibetan borderlands.

Beth Cullen, Christina Leigh Geros (University of Westminster) and Sarah Carson (Princeton University) focused on popular cultures in India for their research. The former two scholars explored the various representations of weather in contemporary and historic Indian popular culture. Carson considered the reception of printed forecasts across the late nineteenth century and the controversies inherent in the production of those forecasts across different types of administration, department and newspaper. 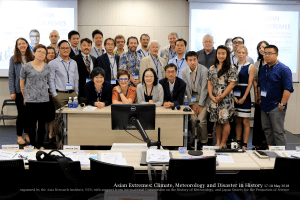 Like Huang, Marlon Zhu (Institute of Modern History, Academia Sinica) also used contemporary media sources as his research base, exploring how English language newspapers communicated the weather, especially extreme weather and storm warnings, in Asia port cities, including Hong Kong. In so doing, he explores the reception of such warnings by the readers and users of relevant press reports, in particular their sense of the efficacy of Asian observatory’s extant meteorological science. The paper drew from his broader work on communications technologies, including the telegraph. Also interested in the technological development of the science, Kerby C. Alvarez (Department of History, College of Social Sciences and Philosophy, University of the Philippines–Diliman, and Instituto de Historia, Centro de Ciencias Humanas y Sociales of the Consejo Superior de Investigasciones) focussed on the instruments used at places including the Manila Observatory, arguing that the increasing financial support given to the observatories over between 1865-1941 signalled unprecedented development in meteorological instrumentation.

Focusing on Japan, several papers looked at the history of meteorology and extreme weather in this country. HaruhikoYamamoto (Yamaguchi University) gave an overview of the development of meteorological observation in Japan’s Asian Empire.  Togo Tsukahara

(Kobe University) took this analysis further, exploring Japanese wartime meteorology during the Second World War, as well as looking at the wider French, Dutch, British and Japanese meteorological network that extended across late nineteenth century Asia. Kae Takarabe (College of International Studies, Chubu University) considered the collaboration between Japan and the Smithsonian in the US, especially their utilisation of records made at the United States Naval Hospital in Yokohama during the 1870s, and the subsequent introduction of the Smithsonian Meteorological System in Japan. Lisa Yoshikawa (Hobart and William Smith Colleges) and Takuya Miyagawa (Hiroshima Shudo University) thought about the relationship between weather-related disasters, state and nation and Leslie Mabon (School of Applied Social Studies, Robert Gordon University) looked at how climate change in being managed in modern-day urban Japan.

Ruth Morgan (Monash University) and Matthias Dörries (University of Strasbourg) looked separately at issues more explicitly connected with the Anthropocene. Dörries in particular explored how the nuclear testing of the 1950s-60s shaped debates and perceptions of climatic extremes.

From the perspective of scientists working with historical records, four papers were delivered that considered climate changes and extremes over time. Zhenghong Chen (China Meteorological Administration Training Centre) explained his work on patterns of historical droughts and floods in the Yangtze River Basin in China since the fifteenth century to the modern day. Jun Matsumoto (Tokyo Metropolitan University) gave an overview of his, and colleagues, work on changes in extreme rainfall in the Philippines over the first decades of the twentieth century. Hisayuki Kubota (Hokkaido University) showed how scientists have been utilising weather data collected in a variety of ship’s log books from the mid-nineteenth century to analyse the number of historical typhoon landfall in Japan. These papers provided an interesting insight into the use of historical records from a modern science perspective and, provided meat for discussion as to how scientists and historians can collaborate.

Further insight was also gained from an overview of the early history of the Hong Kong Observatory by one of the few experts on this topic, P. Kevin MacKeown (The University of Hong Kong), a look at maritime weather and disasters from the renowned disaster historian Greg Bankoff (University of Hull)and an exploration of climatic determinism from a German colonial perspective by climatologist Hans von Storch (Helmholtz Center Geesthacht).

Together the papers have revealed the vibrancy of the field of meteorological history in, and about, Asia. They have highlighted the new directions that the field is taking, especially in relation to the cultural history of the weather. They also saw the relevancy of meteorological history for modern-day science, and enabled multi-disciplinary conversations about how best to pursue a useful and active working relationship in the future

But I will tweet and write about erupting volcanoes and strange space shenanigans if it’s monumentally important. Duh. I haven’t gone *that* crazy just yet. ;)

Anyway, thanks for following me! HOW TO KILL AN ASTEROID: coming soon(ish). It’s gonna be *fabulous* fun. 🥳

Tuesday was a chilly and dull day for many, though there were some places that saw sunshine ⛅️

Join us online on Dec. 7 at 6pm SGT (UTC+8) for the second event of our 22/23 seminar series! Historian Dr. Kerby C. Alvarez will share his research on the long history of cyclones in the Philippines. Register here: https://www.eventbrite.co.uk/e/historical-vignettes-on-philippine-typhoons-1600s-2000s-tickets-468565270337 #envhist #climhist